A honeypot is a piece of software or a system that is designed to detect and monitor malicious activity, and deflect attackers from your actual production services and systems. This article will explain the deployment of an interactive SSH honeypot using Cowrie, a free and open-source SSH honeypot. It can log brute force connection attempts and any commands executed by attackers. Additionally, it employs a ‘fake’, isolated filesystem for better interaction and deception. A CentOS 8 machine is used for this guide.

NOTE: This guide assumes SELinux is set to either permissive or disabled.

If using a sudo user, use a root shell for the duration of this setup:

Update your system and install the software packages which are required for this setup:

Ensure the firewall daemon is enabled and running:

Temporarily allow traffic to port 2222. This port will be initially used to access the honeypot.

Switch to the cowrie user:

At this point you should be able to run the honeypot and test things out before proceeding.

From your local machine, try logging into the honeypot as root. Enter any random password but not toor, 123456, or anything containing honeypot. 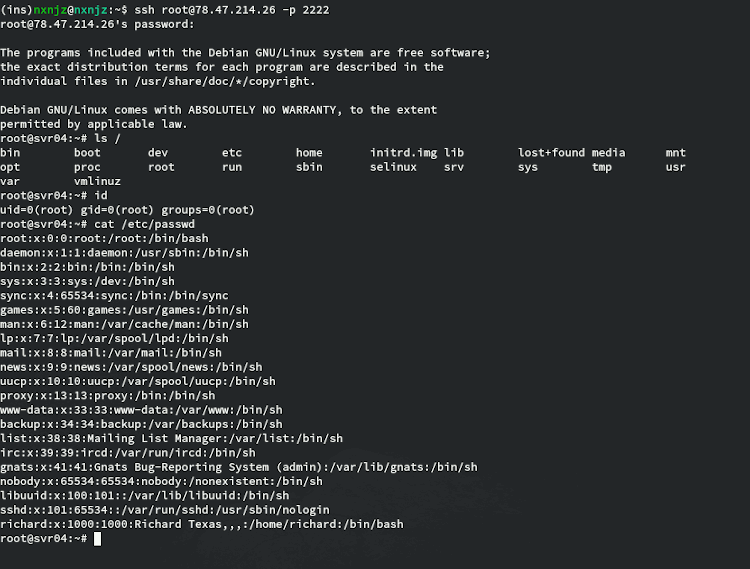 As you can see, we are able to authenticate and run commands as if this were a normal SSH session. Once you’re satisfied with testing, log out of the honeypot and stop Cowrie:

Using a Systemd service to manage the honeypot is recommended for a few reasons:

While still logged in as cowrie , open bin/cowrie with your text editor:

And change them to the following (don’t forget to remove the ‘#’):

Save your changes and then exit back to your root shell:

Create a new Systemd unit file with your text editor:

Save and exit, then start the service:

You can check if it is running with:

If you want the honeypot to start automatically after boot, execute:

Your honeypot will receive significantly more connections if it uses port 22, which is the default SSH port. As Cowrie uses port 2222 by default, you can forward connections on that port to port 22. But first, change the port used by the real SSH server and configure the firewall accordingly.

Make sure this change took effect. The following command should output 222/tcp :

Save the change and restart the SSH server:

Check and make sure that it is now listening on port 222:

Exit your SSH session and reconnect to port 222 instead. If not logged in as root, start a root shell:

Remove the SSH service (which allows traffic to port 22/tcp) from firewalld as it is now running on a different port:

Enable IP masquerading and add a rule to forward traffic on port 22 to port 2222:

That’s it. The honeypot is now accessible on the default SSH port.

While legitimate users and their passwords are stored in /etc/passwd and /etc/shadow, fake SSH users are configured in etc/userdb.txt in the cowrie directory. You can easily configure allowed/disallowed user/password combinations by adding entries to that file.

The following format is used:

The default is as follows:

To change the default, start by creating a file in /home/cowrie/cowrie/etc/ named userdb.txt:

Populate this file according to your needs, then give ownership to the cowrie user and group:

Connection attempts, shell activity and other details are logged to /home/cowrie/cowrie/var/log/cowrie. You may use a logging server to store and display honeypot logs instead, but that is beyond the scope of this article. The collected data from the honeypot can be used to populate IP blacklists, to monitor threats, and for research purposes.